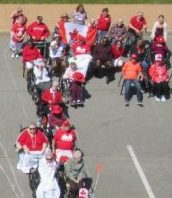 YARMOUTH – They came out in wheelchairs, they hobbled along with canes and although it may have taken a while to arrange, by golly they did it.

Staff, volunteers, residents and their families celebrated Canada’s 150th birthday in a unique way at the Meadows Home for Special Care recently.

The parking lot of the facility, located on Pleasant Street in Yarmouth, was the site of an aerial anniversary photo with participants wearing red forming the number 150. There was even a dog in the picture wearing a Canada Day T-shirt. Seventy out of the 104 residents in The Meadows participated with the oldest being 106.

Neighbourhood lead and recreation manager Lynn LeBlanc says it was a team effort for staff. “It was the most residents that ever came out for an activity,” she said.

Recreation assistant Mykayla Pyne came up with the idea after seeing a picture elsewhere. But how would she arrange for the aerial aspect? Pyne had given Nova Scotia Power a glowing recommendation for their hard work in the past. She approached them to see if they would visit with their hoist bucket. They agreed and the date was set: June 8.

Recreation staff blocked off the parking lot and drew a big 150 with chalk.  Then, with volunteer helpers and families, they brought the residents out, lined them up between the chalk lines and sat with them.

“Everyone was excited to participate and we had a lot of people request us for the picture afterwards,” LeBlanc said.

“It just goes to show that when people get together and put their minds to something and have a really positive attitude, they can make things happen.”