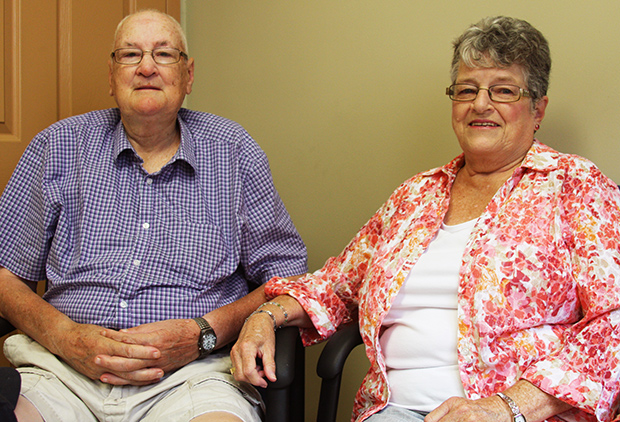 The St. Andrews’ couple has been especially involved with Antigonish Town and County Crime Prevention Association in the last number of years with Kathleen being chairperson, with the organization, for four years.

“Then I took on executive positions with other organizations, there were four other ones I did,” she said in conversation with the Casket Aug. 26.

“I’m retiring from that now, stepping back a little bit,” she said, adding that she hopes new volunteers will step into some of her previous roles and add fresh faces to the organizations she has helped out with.

For Duncan, as he thought back on his days as a volunteer, it started with the local fire department in his home community.

“I was involved with the fire department for 27 years,” he said, adding that included its start-up days. “I was the third person to volunteer at the time, so the third member.”

“Then my health gave out so I had to leave there. I got involved in the community centre … when we built a new community centre,” he said, adding he helped raise a substantial amount of money towards the project.

Duncan also talked about being involved with the start-up of the curling rink in St. Andrews and on how, with both projects (rink, community centre), he would do a lot of cooking during the construction days to help keep everyone on the site and working away.

“If you didn’t feed them a nice dinner, they might go home and not come back,” he said with a chuckle. “So I had to keep them there … give them a nice, good meal and get seven hours out of them.”

Other involvement he and Anne talked about included with their church and the Seniors Getting Involved Association which is instrumental in the holding of the annual Antigonish 55+ Games, an event held in the early spring around St. Andrews and stretching in to locations such as the Antigonish Golf and Country Club and Pins Bowling Centre in Antigonish.

“I started that seven years ago,” Duncan said. “It’s a seniors for seniors group and the Games’ organization.”

Kathleen talked about her volunteering work helping to alleviate some shyness for her.

“I like the idea of meeting people and getting out,” she said.

“I was a little bit shy but once I took on the executive duties, than I sort of got out of that and I was able to vocalize more, meet people.

“I guess you just kind of like to keep going,” she added.

“It helps keep you young,” Duncan said, extending the thought.

“And we were always involved in the community … we wouldn’t have a good community if we didn’t have good volunteers.”