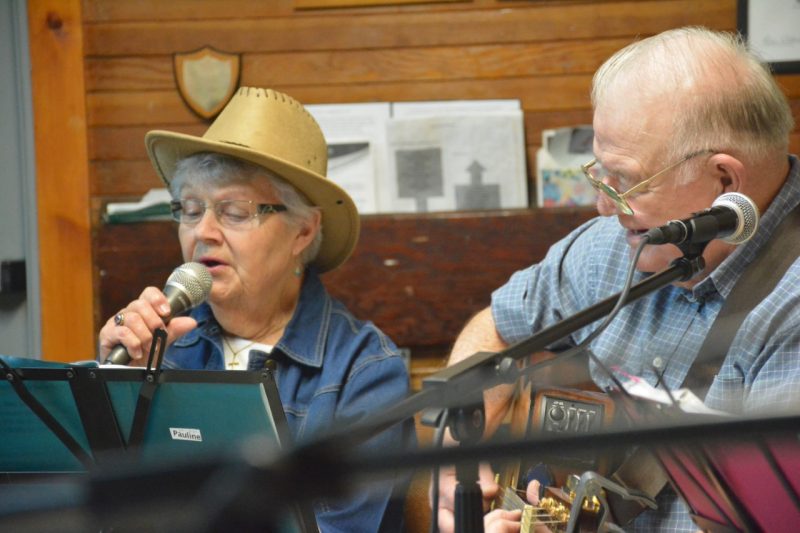 PEMBROKE, YARMOUTH COUNTY, N.S. – When it comes to making seniors happy and smiling, Arnold and Pauline Nickerson of Overton, Yarmouth County, can’t resist pulling out a guitar and breaking into song.

Seniors themselves – Arnold is 86 and Pauline is 85 – they’ve turned their love of music into a revitalization of a small community hall in Pembroke, Yarmouth County, where each Thursday evening for the past six years they’ve led a kitchen party called Arnold and Pauline’s Music Night.

Having started out on the first night years ago with five musicians, they now average 12 to 15 on the kitchen party nights. The musicians, who last week played music on 11 guitars and one accordion, each take turns singing a song as the evening goes on.

Collectively, though, they always start the night at 6:30 p.m. with a song Arnold wrote that starts out like this:

“There’s a little hall in Pembroke, not far from Yarmouth town. Where lots of people gather, to talk and sing some songs. We’re plain old country people, just out for a little fun. At our Pembroke kitchen party, we welcome everyone.”

Like other community halls, the Pembroke Hall has a lot of charm. Photographs line the wall, including a collage of photos of the musicians who play or have played at the kitchen parties. One of the photos is of the Nickerson’s grandson Sean Nickerson, a gifted guitarist who died of cancer. Pauline and Arnold, who are both cancer survivors, hold the kitchen parties in his memory.

As the music is played you can feel the vibration of feet tapping on the tile floor from the musicians and the audience. A ceiling fan hangs overhead, alongside a silver disco ball. Food piles up on the kitchen counter for the lunch that will be served at 8 p.m. Visitors sign a guest book as they come in and drop donations for the hall into a jar. People sway to the music in their seats, and often sing along.

“Since we started this, with the money raised, a parking lot has been built at the hall. There’s an annual seafood chowder supper. They rent the hall out for wedding and baby showers. We’ve had a lot of donations. And our little hall in Pembroke is growing to be quite the thing,” Pauline says. “Now, we’re trying to get a grant to enlarge the kitchen and make a wheelchair washroom.”

Loren Cushing, once president of the hall, is the municipal councillor for the district.

“Community halls build communities,” he says, adding about these music nights, “There’s a lot of friendships.”

The song about the Pembroke Community Hall written by Arnold Nickerson.

The Nickersons, who this year will celebrate their 65th wedding anniversary, have played music and sang at other kitchen parties in the region, as well as at churches, seniors homes, etc. Old-time country and gospel songs are their favourites. Pauline was raised in Pembroke, not far from the hall.

“I didn’t know you then,” laughs Arnold. “It was before my time.”

Now she’s trying to learn how to play the accordion.

The couple intends to stick with the kitchen parties as long as they can. They’ll have to miss at least one when Pauline gets a long- awaited hip replacement, but with the exception of that, they continue to strive for perfect attendance.