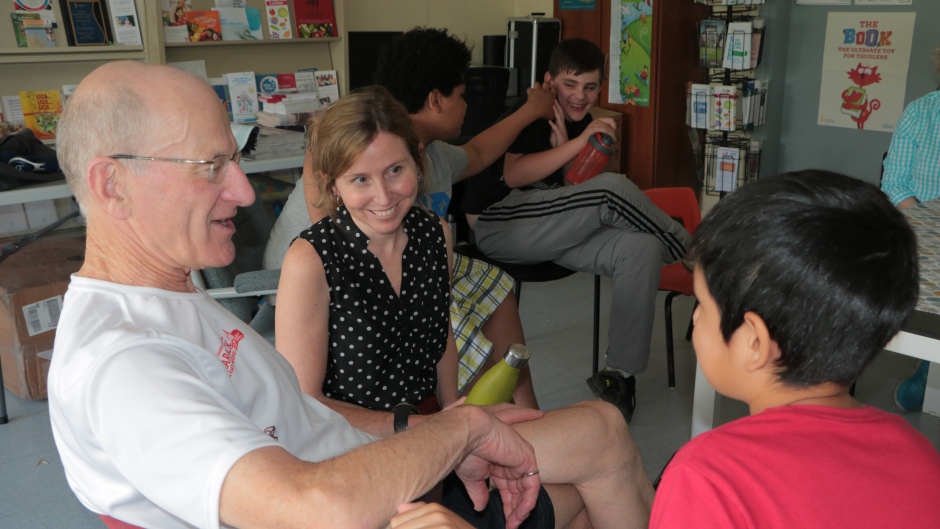 About six years ago, she developed what’s now called the senior buddies program, which brings senior citizens into the classroom to work on creative projects with her students.

“I recognized that working with seniors would give my students a sense of having elders with them. And it also brings out a really wonderful thing in the seniors who don’t often get to be around youth,” she said.

The senior citizens, who are iof mostly Irish descent, are paired up with students in Howell’s class. Most of the kids are Indigenous, with many coming from Cree communities along the James Bay coast and a few from Kitigan Zibi, a First Nation community not far from Gatineau.

For Howell, the senior buddies program opens up channels for sharing and learning, but added that the learning goes both ways.

When the class discussed Jordan River Anderson, Howell said her students were very touched by his story. “[He was] a little boy from Norway House Cree nation who was born in a Manitoba hospital with complex medical needs, and he had to stay there until he was two.”

When Anderson was ready to go home, provincial and federal governments couldn’t decide who would pay for the care he needed. He died at age five still at the hospital.

Howell said his story really hit home for the kids, who felt very strongly about what they were learning.

“My students and I really try to understand reconciliation in the sense that it’s not just that you say sorry and you move one, but you do something about it. So for us, that involves a lot of teaching others, so they said, ‘let’s teach our buddies about Jordan.”‘

Seniors and students get together at Pierre Elliott Trudeau elementary school in Gatineau, Quebec for a buddy program. (Halima Sogbesan/CBC)

That opened up a discussion where the students could share the anger and hurt they felt with their senior buddies.

Louis Comerton, 71, has been part of the buddies program for years. “I didn’t really know anything about it,” he said. “It made me feel kind of upset in a sense that everybody didn’t have equal access in the country, even though the law says everybody should have equal access to government services.”

Howell admitted that when she started teaching, she hadn’t learned much about Indigenous history either. But said everything changed for her in 2006.