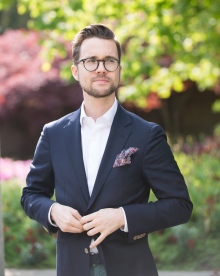 CBC Radio
The 180 with Jim Brown

For his entire life, Max Fawcett has watched the well-being of baby boomers be privileged over other Canadians.

Fawcett is critical of the argument and argues it’s time to privilege future generations over boomers.

Fawcett spoke to host Jim Brown about the problems inherent to creating policy targeted for an aging generation  This interview has been condensed for clarity and length.

What’s wrong in making planning decisions to take into account the need for aging baby boomers?

It reflects a broader trend in society – we seem to make all our policy decisions based on what’s best for the baby boomers. Policy has tended to benefit them to the disadvantage of other Canadians. We’re starting to see that more and more as the boomers age, as the number of Canadians who are senior citizens approaches 1 in 4, which is a record high. It’s starting to pull money out of social programs and other areas where it might be more effectively deployed.

There’s this myth that still exists that seniors suffer poverty more than the rest of us on average, and the fact of the matter is that hasn’t been true in almost two decades. We still have all these policies on the books, all these tax credits, all these programs that give handouts and freebies to seniors who don’t really need them. That money could be going to students, single parents, to immigrants – it could be going to a whole bunch of other groups who actually need the money, who need the help.

What do you have against baby boomers? This sounds personal!

It’s nothing personal – I don’t have anything against individual boomers… but I just think that it’s a generation that has hogged the limelight and taken up too much of the attention for too long, and frankly they had it easy. When they went into the job market, jobs were plentiful, unions were still real things that weren’t an endangered species. When they started earning, the stock market was booming, the bond market was booming, they bought houses when they were cheap and in most major cities they turned into winning lottery tickets. So they’ve had a real great run of luck and it’s time to tilt the tables towards the rest of us.

Young people take a lot of heat, and get made fun of a lot, for being soft and entitled. But younger people really have a tougher go than their parents did. It’s demonstrably true – lay out the numbers for what it costs to go to school, what it costs to buy a house, what they earn on an average job after graduating from university, everything – except perhaps access to cell phones – is harder. So I think we should be focusing on making it easier for young people and not easier for people who’ve always had it pretty easy.

Max Fawcett argues for too long Canadian policies have tilted in favour of baby boomers and that next week’s budget is an opportunity for the government to even things out. (provided)

So this report that came out on suburbs and seniors, how should policy makers respond to it?

I would hope they’d respond to it by looking at the future, looking at the direction that city-making is going and trying to build cities that accommodate and empower the largest number of people. As a public, we have fewer dollars than we did 20 or 30 years ago when these suburbs were being built out most aggressively, so we need to maximize the bang for our buck. We don’t do that by building suburbs that you need to drive 45 minutes to get to. We do that by building density, by reinvesting in the downtown core, investing in transit, things that get you multiples on your investment. Rather than continuing to build this car-oriented form simply because that’s the way it’s always been and boomers are comfortable with it.

You recently wrote that in the next federal budget, the government should cut subsidies to seniors. What sorts of things are you talking about there?

To be clear, I’m not suggesting cutbacks on CPP or OAS. Those are untouchable programs as far as I’m concerned. But there are some things in the tax code that are a little bit conspicuous.  They’re holdovers from a time – the 70s and 80s – when seniors really did suffer from disproportionately high levels of poverty. So there’s a tax credit in there that gives you a pretty sizeable tax break just for being over a certain age. That seems unreasonable to me – we should be means-testing that and make sure that if you’re a senior who has a $3 million house or has saved well for retirement then you don’t get to take that tax credit.

What about the argument that seniors paid into the system for decades, so should  be allowed to see the benefits when they retire?

I’m sympathetic to that. I don’t think I’m suggesting taking away anything that they’ve paid in for. A fair criticism of my argument is that the marginal tax rate was higher 20 or 30 years ago than it is today, so they paid more tax on average on their wages than I do today. But the flip side is that on CPP, they pay less than half of what I pay today – so I don’t think you can add up a ledger and say ‘I paid this much in, so I should get this much out.’ I think the point is that there’s a social contract in place, and was in place when they were growing up, which is that we should always try to make things easier for the next generation – that the next generation should do better than the previous one. That’s sort of the whole basis of middle class society. But that’s not the case anymore. The next generations are doing worse – they’re facing big mountains of debt and difficulty, and I think that requires us to reassess that social contract and where we are allocating funds.