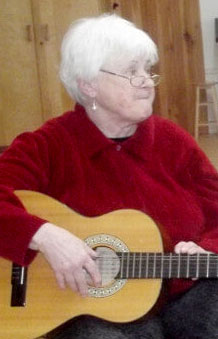 L’ARDOISE: Richmond County seniors will come together to share their creativity with the public at an upcoming art and theatre showcase.

The premier “Senior Moments” event on March 8 will feature the work of nearly 30 local seniors who took part in the Mind-Body-Spirit project sponsored by the Dr. Kingston Memorial Community Health Centre.

“The goal was to target isolated seniors, and of course, isolation has a significant impact on health,” said project coordinator Christine Oakley.

The project allowed seniors age 55 and over to take part in three free arts based workshops. Zine and PhotoVoice classes facilitated by Dawn Ostrem gave seniors the chance to create their own magazines and photo journals. A theatre workshop facilitated by Adam Cooke allowed participants to express themselves through skits and music. The showcase on March 8 will feature the theatre group’s first live production, as well as a gallery display of Zine and PhotoVoice projects.

“The specific objective was to include seniors in all stages of all three projects from design to execution to display or production,” said Oakley.

Oakley says she is pleased with the success of the project so far and hopes to obtain additional funding for future workshops. She added that there are still opportunities for seniors to get involved.

“We’ve still got space available for the theatre group if anybody wants to take part in even the behind-the-scenes productions,” said Oakley.

Cooke has been guiding the theatre group since the first rehearsal in November. Participants come from throughout Richmond County and vary widely in age. He said his goal was to allow them the freedom to tell their own stories.

“We’re hoping to represent what life is like for those 55 and older in Richmond County and to represent all different aspects of those lives,” said Cooke. “We’re hoping people will come away entertained but also enlightened, informed, and perhaps realizing something about life as a senior in Richmond County that they wouldn’t have known going in.”

Participants have taken charge of all aspects of production from writing scripts to performing. Skits range from humorous, to thought-provoking and touch on a wide variety of topics including on-line dating and coping with loss.

“One of the cast members is doing a story about characters he knew at his former workplace,” said Cooke. “We wanted to encourage their creativity and it has just gone wonderfully.”

While sharing personal stories onstage can be intimidating, Cooke says the participants have risen to the occasion and feedback has been positive.

“There’s a lot about this that is scary. We’re asking these people to do something not all of them have experience doing,” said Cooke. “It’s just magical to see them reaching beyond where they’ve been and saying, ‘I’m going to give this a try for the first time.’”

The premier Seniors Moments showcase will take place at 7 p.m. on March 8 at the L’Ardoise Community Centre. There will be a collection at the door for the local food bank. Organizers say they hope to host additional events throughout Richmond County in the near future. More information can be found on the group’s Facebook page “New Horizons Arts for Seniors of Richmond County.”