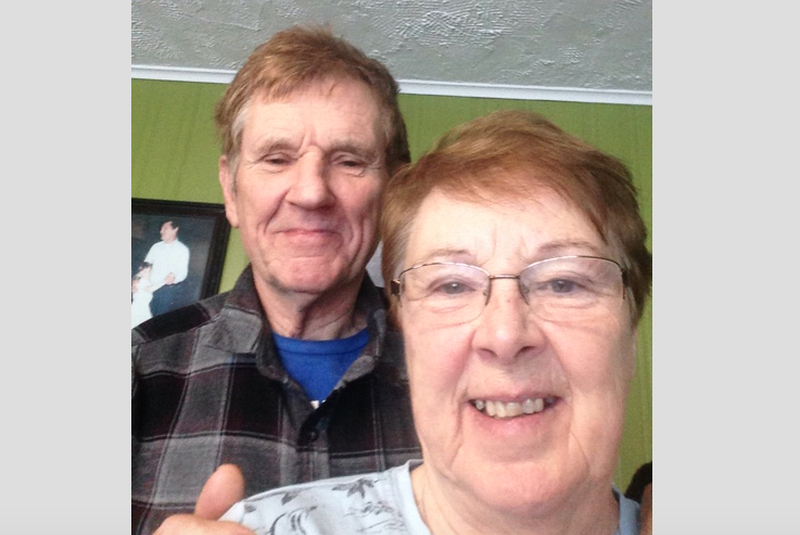 The Telegram
St. John’s NL
PORT AU CHOIX, NL – Delbert and Stella Mailman are a team both at home and out on the water.

Delbert, 78, and Stella, 75, are a married couple from Port au Choix and they have been fishing lobster and groundfish together for the last 15 years.

They operate an outboard motorboat together and fish their lobster at St. John Island, located over six miles northeast of Port au Choix.

They catch groundfish, including halibut and cod, out of Port au Choix.

The two will have been married for 53 years this Feb 27, and that experience together certainly helps them out in boat.

Time in the fishery

Stella started fishing with Delbert after their youngest son gave up fishing and moved away for a new job in the Northwest Territories.

“I decided I’ll give it a try, see what I can do,” she told the Northern Pen.

Stella has spent some time fishing before but only on occasion; this was the first time she took it on for a living.

At that time, she was supervisor at a national historic site.

It was a big, sudden transition to make.

At first, she was concerned she might be a bit of a drag to Delbert, because of her limited experience.

But Stella was prepared and didn’t find it difficult. Fifteen years later, she expresses no regrets.

“It was a little bit different but I’m loving every minute of it,” she said.

Delbert, in contrast, has spent most of his life in the fishery, harkening back to his days as a 12-year-old boy in Nova Scotia – where he is from originally.

“I enjoys fishing, I loves it, I always liked it,” he said.

When he moved to Port au Choix, he started fishing with Stella’s brother.

After some difficulties – including a situation where the two men were stranded on an island and another where the boat caught fire – he stepped away from the fishery for a time, and the Mailmans ran a garage called Mailmans’ Service Station.

But Delbert returned to the water again about 30 years ago, when their children became old enough to take over the business for them.

He’s been fishing lobster with his son, and subsequently Stella, ever since.

With the wealth of experience they’ve accumulated working together, they continue to be a successful team out on the water.

In fact, each has their own role on the boat.

Delbert runs the motor and hauls in the lobster traps. Once aboard, Stella takes over. Her job involves removing the lobsters and baiting the traps. She measures the lobsters, bands them and pushes the traps back into the water.

But it hasn’t always been smooth sailing.

A few years ago, the Mailmans had to enlist the help of the coast guard after running aground on a shoal off of St. John Island.

It was the end of the day and there were no other boats around. They hauled up the last line of gear and required a few repairs, when suddenly there was a crash.

“Not paying attention to our surroundings, I guess, and all of a sudden I heard a smash – didn’t know what it was,” said Stella. “Never even looked up. And the second time we smashed, we looked up and we were up on the rock.”

The rock they had crashed into is known locally as “Harbour Rock.”

There was no one around and they were unable to reach anyone by phone.

The part of the rock they were on would be submerged whenever the tide rose.

Their only option was to contact the coast guard for rescue.

“In no time, they were there to get us off the rock but they would not take our boat,” said Stella. “We had a lot to lose seeing the boat beat up on the rocks.”

At that moment, Stella thought she might have broken her toe. But they were determined to rescue their boat.

The Mailmans asked the coast guard to take them to St. John Island where their nephew was, and he took them back to the boat.

The three of them worked together, got a line on the boat and towed it clear.

“It looked like it was ready to go down,” Stella said.

She had to get aboard and put some pumps on the vessel. The coast guard stood by while this was taking place.

Stella says when they got back to the cabin she knew something was wrong. Nevertheless, they continued working the rest of the week, hauling up gear from Monday through Friday.

That was when she decided to head home to have her foot checked out.

Stella only accepted putting a slab cast on it so she could continue working.

She found humour in the situation.

“When I went down to the boat in the morning to get aboard, I went down like a lobster, backwards, because I couldn’t walk forward,” she said.

The following year, the roles were reversed as the Mailmans had to play coast guard themselves, rescuing Stella’s two brothers.

It was a stormy day and her brothers were the only two people on the water.

The four were at the Mailmans’ cabin and when her brothers left, Stella thought they were heading back to their own place. But 15 minutes later, she received a call from one of them.

They had run ashore.

Delbert and Stella kicked things into gear. When they got around northwest point, there was no sign of the men.

“I thought they were gone,” recalled Stella.

But they went down a little further and saw her brothers and their boat way in over the rocks.

Her youngest brother was down in the water, holding the boat to try to save it, while the oldest brother was walking down around the shore, trying to find his sister and brother-in-law.

Stella tied a rope to a buoy, so it would float a rope ashore to him. The first time she threw the buoy, it didn’t make it. She hauled it back and tried again. This time, it got ashore.

Her older brother walked out and grabbed the buoy, got the rope and tied it around their boat.

Stella and Delbert were able to pull them off the rocks and the rescue was a success.

“At that point, I didn’t act like a sister, I acted like a mother because I was really upset with them,” she said, laughing. “So I just told them to go as fast as they could to their own cabin.”

The worst situation came for the Mailmans in 2013.

It was the second day of the lobster fishery when their cabin on St. John Island burned down.

They lost everything, from their fishing gear to Delbert’s eyeglasses. The only thing belonging to them that was saved was the oil clothes, which were in a shed.

Other fishers on the island loaned items, including boots and coats, so they could go out in boat the next morning.

They knew they would have to start over again.

“That was quite a setback, because there was no insurance or anything on it and we lost everything we had,” said Stella. “It was like a home. There were three bedrooms, a living room, a kitchen, a dining room and a bathroom. It was a fair size cabin. And we lost everything.”

But they were not fazed.

Their nephew owned an older cabin, so they tried to repair that to continue with fishing the rest of the year. They used the cabin for two seasons and the following year, they finished building a new one.

On a lighter note, Delbert and Stella have caught something very few others have had the privilege to see: a pharaoh lobster.

Stella says the pharaoh lobster is one in 30 million lobsters caught – it is rarer than the blue lobster and is identified by its yellow or gold colour.

The Mailmans donated it to the Petty Harbour Aquarium where, as far as Stella knows, it still is today.

“They sent me pictures of it, in its new home, how they put in a certain cage, rocks around it,” said Stella. “It looked like it was pretty cozy.”

They were presented a plaque from the aquarium in appreciation for the donation.

Delbert and Stella are looking forward to the 2018 fishing season but they’re hoping they didn’t lose any of their lobster pots this winter.

They haven’t been able to get over to the island where the pots are located. And given that there have been high tides and wind this winter, they have some concern that the pots may not be there when they’re able to get out – probably in April.

The lobster season would have to be put on hold if the pots are lost. And while they would still have the groundfish, Stella says lobster is their main resource and they “would be lost without it.”

They’re hoping to continue fishing for as long as they can.

Stella says how long they continue fishing “all depends on the man above.” In other words, she adds, as long as they remain healthy, they’ll be out on the water, setting their lobster traps off of St. John Island.

“We both love the water,” she said.