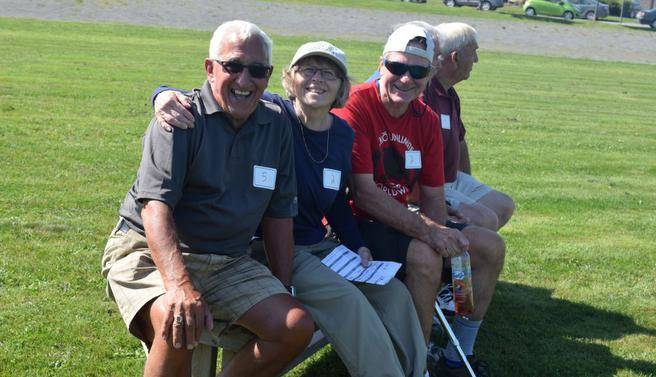 As a member of the National Senior Games Association, the Nova Scotia 55+Games Society mission is to bring individuals across the province aged 55 and older to a biannual event featuring games and activities both physically and mentally challenging, and at the same time provide a venue emphasizing social interaction.

By offering these games, the Nova Scotia 55+ Games Society encourages an active lifestyle for older adults in Nova Scotia.

The board of directors consists of volunteers representing six regions across the province. The first games in 2005 were held in Cornwallis with 125 participants. By 2015, that number grew to 744 participants in Pictou County.

There are 25 sports and activities at the games, which are chosen from a list of core and optional activities and are played over a three-day period. They include ice hockey, tennis, track and field, pickleball, darts, bowling, card games such as bridge and cribbage, and Scrabble. Medal winners from these games will have a chance at the national games held in 2018 in Saint John, N.B.

Coupled with the obvious benefit of being active is the opportunity to travel around your region, your province and even your country to meet new and interesting friends who share the same love of life and determination to take every advantage of what it has to offer.

The goals of the Nova Scotia 55+ Games Society are to become the main sport and activity event for Nova Scotians aged 55 and older; become an advocacy group for those aged 55+ in Nova Scotia; create a strong social network; and be a trusted resource.

To find out more about the Nova Scotia 55+ Games and who to contact in your region, visit www.2017ns55plusgames.ca or email 55plusgames2017

The 2017 Nova Scotia 55+ Games are being hosted by Events Lunenburg County, with anticipated numbers of participants to be more than 800.