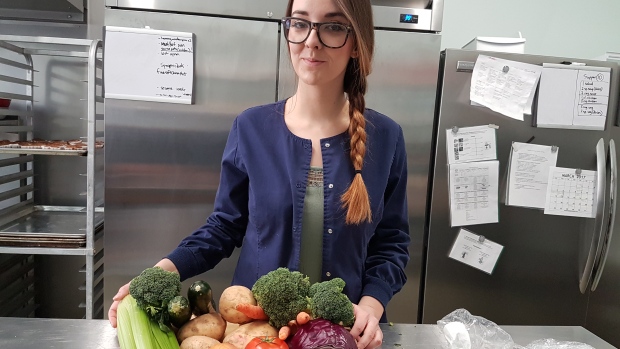 Three community groups in Sydney, N.S., are teaming up to deliver groceries, meals and nutritional advice to seniors.

The province has provided $9,400 under its Age Friendly program, which supports community groups that enhance the social and economic contributions of seniors across the province.

The food box project was developed by the Ecology Action Centre, New Dawn Meals on Wheels and the Pan-Cape Breton Food Hub.

Claire Turpin, program co-ordinator with New Dawn Meals on Wheels, said the project is a great fit for her organization. Turpin said the food hub will pick up the food for delivery.

“We’re hoping to get food hub to co-ordinate with the local producers and get all of the food boxes and collect the grocery items, and that way our volunteers can help us deliver them to our clients,” Turpin said.

Turpin said her organization has about 50 clients. Meals cost $6.50, she said, and include an entree, a side and dessert.

While the group hasn’t come up with a set price for the food boxes yet, she said the goal will be to make them “as affordable as possible.”

“We hear from seniors often and we hear those needs that sometimes our clients have, the mobility issues to go out to get to the grocery store or they don’t have transportation. So for us it’s really providing them with a broader spectrum of nutrition,” Turpin said.

Turpin, who is a registered dietitian, said proper nutrition for seniors makes a difference.

Bernie Larusic, vice-president of the Cape Breton Council of Seniors and Pensioners, says funding for the project shows the provincial government is listening to the needs of seniors. (George Mortimer/CBC)

“If people are eating well and are hydrated, they’re stronger and they’re healthier so that’s our main drive.”

Bernie Larusic, vice-president of the Cape Breton Council of Seniors and Pensioners, praised the announcement as a step up for seniors.

“Some people understand what a good diet is and some people may not,” Larusic said.

“It shows that the government is looking at seniors and listening and understands that seniors need more help than what has been given.”

The announcement was made by Derek Mombourquette, the MLA for Sydney-Whitney Pier, on behalf of Health Minister Leo Glavine.

“You really have three great partners coming forward supporting a great initiative that supports older adults accessing food and this is one of those programs that is going to help a lot of residents in the community here,” Mombourquette said.

Turpin said the provincial funding will go toward the hiring of a co-ordinator, the purchase of thermal bags for food delivery and transportation.

Turpin said if successful, they plan to do it as a long-term project .