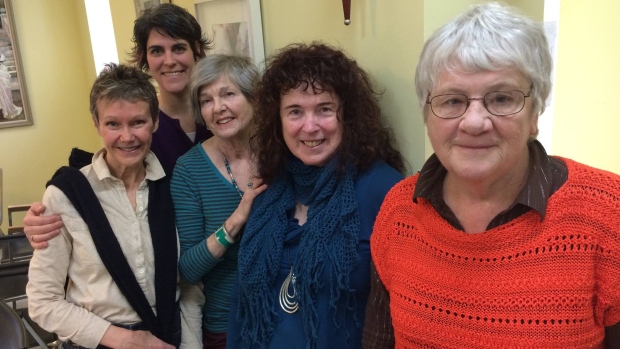 When 61-year-old Rae Collins walks down the sidewalk, sometimes she can’t help but feel invisible.

All too often, she’ll find herself having to jump out of the way of younger passerby, who are oblivious to her presence.

“They’re just involved with their own conversations, or they’re staring down at their cell phones as they walk along,” she said.

The experience is shared among many seniors in Vancouver — and its featured in a new play, Seniors Create, that aims to raise awareness of the social challenges many seniors endure in virtue of their age.

Meet the B.C. senior who mailed us his life in a box
B.C. announces $500M plan to improve seniors’ care
Vancouver seniors are becoming increasingly vulnerable to homelessness, report finds

“I thought is this a common experience amongst many seniors, so I started the Seniors Create project.”

Perrin wanted to create a stage play that reflected the universality of certain feelings and emotions amongst seniors. She started by running workshops, where seniors would connect and share their stories, which eventually became the foundation of the script.

The project is still in its early phases, but she says the interest from participants has caught on like wildfire.

“People are really excited about [being heard], and just having a voice,” she said. “I think that’s been the biggest thing — seniors having the opportunity to be listened to.”

According to 72-year-old Gina Stockdale, one of Perrin’s mentors and contributer to the project, the lived experiences embodied within the script read like you’re listening in on a candid conversation.

“Everything in the script … comes from people’s own experiences and their own memories and their own wisdom. You could never write the richness of the material that we’ve collected. It’s an incredible patchwork quilt,” she said.

Stockdale says she hopes the eventual stage production of the project helps mend the relationship between the young and the old.

“One of the things that we have to do is to connect the ages. It’s absolutely vital that the generations talk to each other and stay connected and aren’t frightened of each other.”