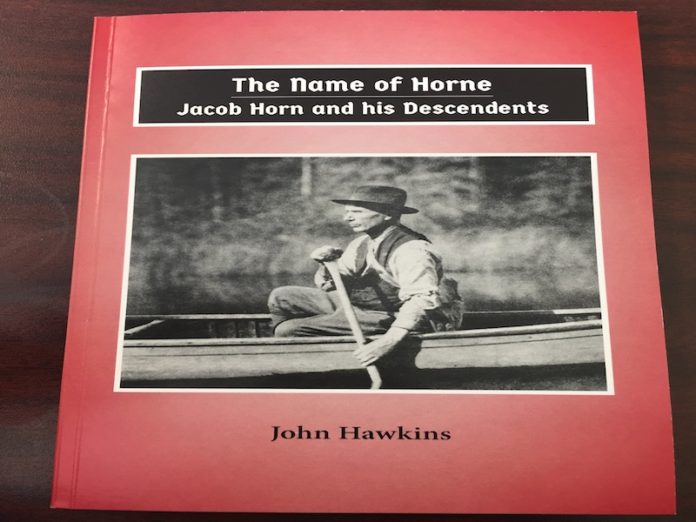 One of East Hants’ most prominent names in their history is the topic of John “Jack” Hawkins latest book.

“This book is a brief account of the life of Jabob Horne and some of his descendants, ” said Hawkins. ” Over the years I have been given records and information on Jacob and the early settlers. Mary Horne Knotling or Oregon has done a lot of research and passed it along to me.”

The Name of Horne, Jacob and his Decendents, tells the story of Jacob Horn, soldier and adventurer, who distinguished himself in the Battle of Lousiboug and on the Plains of Abraham, and showshoed from Quebec to Halfiax to claim his reward —a large grant of land on McNab’s Island, and later at Eastern Passage.

Also, his son. Pioneer Philip Andrew Horn, first citizen of Horne Settlement singed a personal bond, binding himself; his wife; and members of his family to a large debt to purchase 700 acres of unknown land on Grand Lake. he then moved his family, cattle, and farm implements from Dutch Village to the Shubencadie River through unsettled forests to establish Horne Settlement.

Then came his son, Andrew Philip Horne, farmer and businessman, who inherited the whole eastern side of Little Grand Lake and sold land on the Shubenacadie River to allow the Shubenacadie Canal to be built.

One descendent, Edmund Henry Horne, the prospector they said was “washed up” at the age of 56, but he left Kirkland Lake and headed across the Quebec border and founded one of Canada’s greatest mining operations at Noranda, Quebec and became one of Nova Scotia’s richest men.

His cousin, Klondike Jack Horne, with an unerring nose for gold, headed for the Klondike two years before the strike. While there he met Lying George Carmack, discoverer of the Klondike lead and Horne became a millionaire at the age of 35. Near death with pneumonia during winter, he was kept alive by a laundress, the lady he later married.

Then there was John C. Horne, the great Nova Scotia lumber baron, who in one shrewd business deal bout 9,000 acres for a mere dollar an acre.

Pictured in the book is also Edmund Donatus Horne (ED Horne). Garage owner, inventor, poet, prospector and businessman, who invented the Horne Tire Changer, sold on both sides of the border and built a large brick garage now known as Shooters Pub.

“As the older residents pass on, the oral history could be lost. I though I would put what I had gathered down on paper. This small book is a limited edition so that it will one on record at the library, Nova Scotia Archives, and at the old EH Horne School.

“I am often asked where the title came from, “The Name of Horne” was taken from Jacob’s will. It is a name he seemed to be quite proud of.”