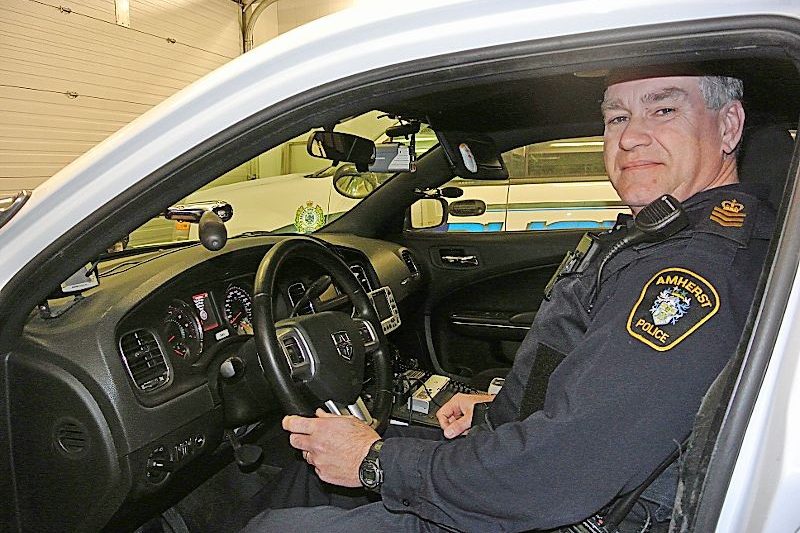 AMHERST, N.S. – While much has changed since Scott White first put on the uniform 40 years ago, some things remain the same.

The 59-year-old staff sergeant joined the Amherst Police Department at age 18 on Jan. 12, 1977, fresh out of the Atlantic Police Academy and not really knowing what he was getting into.

“Technically I wasn’t old enough to go into a bar. The drinking age was 19,” White said. “It was definitely a different time then and things sure have changed in terms of technology and responsibilities, but the one thing that has never changed is the camaraderie among the officers.”

The son of Amherst hockey great Shermie White and Connie White, he grew up in Amherst and played his minor hockey here. He said former chief Hans Plomp talked to him about policing when he was playing hockey on a minor hockey team that Plomp managed.

“He was great to talk to about it and he gave me a lot of advice and direction about what it took to police officer,” White said. “I’m still very grateful for what he did and the advice he gave me.”

White said there were fewer officers in 1977 with three-person shifts and no dispatcher. Of the three officers on duty, one had to stay back in the office and handle the dispatching.

There were only three police cars.

“There was always a fight. No one liked being stuck in the office,” he said.

White said there have been plenty of changes in policing in 40 years. While technology available to investigators and officers has certainly been enhanced, so too has the accountability that officers have. That includes mountains of paperwork and computer inputting with each file.

White said there were times he thought about finding something else to do and he remembers going to see the former deputy chief Jack Ripley about quitting. Ripley convinced him to stay and he has never regretted that decision.

Policing is a stressful job and he admitted it’s sometimes difficult to forget the things he saw during a shift. The important thing is not to take the stress home.

“Home support is the greatest thing. You try not to take the job home with you, but sometimes it’s difficult,” he said. “I stay active with golf, hockey and work out in the gym every day. You try not to think about it because it will drive you crazy if you do.

“Not only do you deal with stressful situations, but you deal a lot with death. I’ve been to suicides, shootings, stabbings, hangings. It is never easy to deal with.”

One of the things that helps overcome the stressful incidents are the ones in which officers have helped make a difference in someone’s life.

Chief Ian Naylor said it’s amazing for someone to stay in one job for 40 years.

He draws a comparison to watching White when he played with the Junior Ramblers.

“He was a stay at home defenceman, he was never a flashy guy. He did and does everything the way it’s supposed to be done,” Naylor said. “He has always been a humble person who has never sought the limelight.”

From there the department spend a couple of weeks at the fire department following the August 2012 fire, then to its quarters atop the Four Fathers Memorial Library and its present home on Havelock Street.