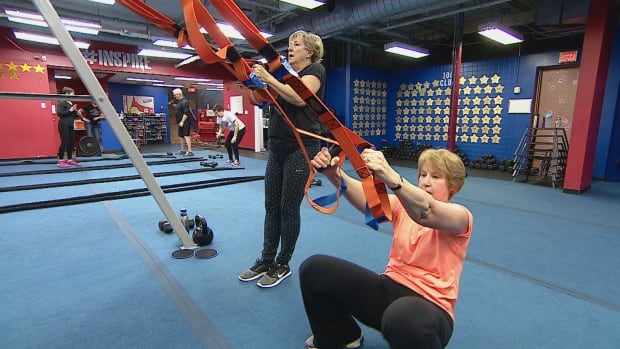 A Calgary fitness coach says keeping the body and mind engaged is more and more important for seniors as Canadian life expectancy continues to rise.

“We are not dying at 60 anymore, we are living to 100, so in reality they have got a third of their life left,” Derek Shannon told CBC News.

Derek Shannon of Calgary South Fit Body Boot Camp says seniors may be surprised at what they can accomplish. (Monty Kruger/CBC)

Canadians born in 2030 will live longer by a few years — to age 84 for men and 87 for women — than the preceding generation, according to a U.K. study that projects life expectancies in 35 industrialized countries will continue to climb.

Shannon says staying active, along with a good diet, can reduce the seriousness of some falls and injuries.

A fitness coach says senior health, both body and mind, is increasingly important as Canadians are living longer. (Monty Kruger/CBC)

Age for some, is just a state of mind, he explained.

“These guys are capable of so much more than we give them credit for, than they give themselves credit for. Some of these guys put our regular boot campers to shame, it is amazing,” Shannon said.

Canadians born in 2030 will live longer by a few years — to age 84 for a man and 87 for a woman — than the preceding generation, a U.K. study projects. (Monty Kruger/CBC)

His Super 60+ Camp program has seniors who are in their 80s.

“They have limitations. You just work within your limitations but don’t let it stop you from being active, don’t be afraid,” he said.

And there can be a flip side to limitations too.