Ruth and Burton Mentis take comfort in knowing they don’t have to hire anyone to plow them out whenever a huge snowstorm hits Truro, N.S.

The couple, like all of the other seniors who still live in their West Prince Street homes, never have to lift shovel. That’s because a group of men from their street show up like clockwork to plow for free.

“Right after a storm, we have four or five younger men, they come around with snowblowers and blow out most of the seniors and check to see if they need anything,” Burton Mentis said Wednesday.

“We’ll offer them money for gas for the machines and half the time they won’t even take that. So the wife … she bakes quite a bit so she’ll just bake them a pie or a thing of macaroni and cheese.”

If the men are working during a storm, they’ll loan their machines to someone who’s willing to clear the seniors’ driveways, Mentis said.

Mentis said these acts of kindness mean a lot to him because he has a bad heart and can’t shovel. On Tuesday, he couldn’t even get out his door before help arrived.

“This is quite a close community anyway and when something happens, there’s always somebody there. They’ll phone and see if you’re all right.”

Jamie Paris, 42, is one of the volunteers who plow the seniors out in the winter and mow their lawns in the summer. His wife, Carla, helps by shovelling around their cars while he plows.

Jamie and Carla Paris shovel and plow their elderly neighbours’ driveways in Truro, N.S., after every snowstorm (Jamie Paris)

Paris, who was born and raised in Truro, said they pitch in out of respect for their elders.

“It’s just something we’ve always done ever since we were young,” Paris said. “We’ve been plowing and snow shovelling our entire lives. It seems like each generation that comes up takes it on.”

A lot of seniors, he said, are scared to be alone during snowstorms.

“So it’s always nice just to check up on them, make sure that they can get out.”

The men look for no praise for their good deeds.

“Just them saying thank you is more than enough of a response for me…. we’ll jump over fences and do anything to help them because they’re the ones who made us who we are today — strong black men.”

In the Halifax area, Good Samaritans also pitched in to help Jacqueline Cottreau during Monday’s storm.She was inside her Fairview home, unsure she would be able to make it out to shovel. At the time, she was suffering from a migraine. 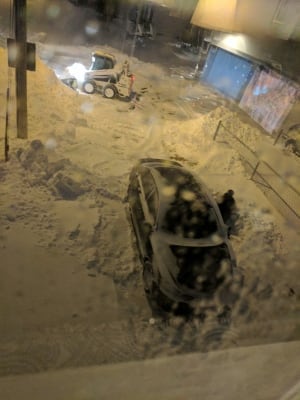 When she looked outside at around 8 p.m. Monday, there was someone in a small Bobcat plowing and another person shovelling her driveway. She has no idea who these kind strangers were.

Cottreau said she was relieved she did not have to shovel.

“My car actually wasn’t too bad but … the drifts had blown all around it,” Cottreau told CBC’s Information Morning Wednesday. “They had dug me spots to get into the car.”

Cottreau said she believes the Good Samaritans also cleared other driveways in her neighbourhood.

“It’s heartwarming. It’s nice to know that there’s somebody out there helping out others that aren’t out there doing it themselves or able to,” she said. “I’m actually able to, but it’s just they randomly hit my driveway. No one asked any questions and just did it, and that was great.”

Cottreau’s boyfriend went outside to thank them.

“They didn’t ask for any money, didn’t ask for anything, just kind of moved on to the next driveway,” Cottreau said. “They just did a wave and that was it.”Bonita Slevin, another senior, lives in an apartment in Barrington Passage. That region got hit hard by the latest storm.

In her area, she said a lot of people also plow out and check on their neighbours, especially the seniors. Most of Slevin’s neighbours also have family that stop by.

“We do keep a good watch. If somebody’s sick, we keep seeing if they need anything,” Slevin said.

“I will help anybody out if I’ve got something in the apartment that they need or anything, I can always give it to them. Most of us keep a good stock of grub around.”

With files from CBC’s Information Morning