A Nova Scotia woman says she is suffering dental pain because she cannot afford treatment for her advanced gum disease.

“Don’t get old without money,” said Sharon McCaskey, 73, of Sydney.

McCaskey, who has advanced periodontal disease, has 14 teeth left and a growing list of complications.

Her dental problems have reached the point where McCaskey now has trouble properly chewing her food.

McCaskey has gastrointestinal problems and sometimes chokes while trying to swallow. She has also lost a lot of weight because of her dental issues.

The teeth she has left are crooked and discoloured, which has made McCaskey self-conscious and embarrassed by her appearance.

“It’s really, really, very difficult to go out, to speak to people,” she said. “I’d like to go out and volunteer but it’s hard to put yourself out there in public.”

McCaskey lives in a modest mobile home in a trailer court near Sydney. She said $2,100 a month in pensions doesn’t leave enough to pay a dental bill of at least $2,800.

That would cover anaesthetic and removing her remaining teeth. McCaskey would then need false teeth.

McCaskey said she had spoken to her doctor and asked dentists for pro bono work, but no one was able to help. 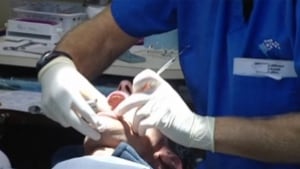 As a last resort, McCaskey called the Ally Centre in Sydney, which recently organized free clinics for basic dental care. But Janet Bickerton, the chair of the centre, said it doesn’t provide the level of treatment McCaskey needs.

On Wednesday, after hearing McCaskey’s story on CBC News, Bickerton said a dental surgeon offered to take care of her. The dentist does not want to be identified.

Bickerton said almost all the centre’s clients have dental problems they can’t afford to fix.

She said it doesn’t make sense that health coverage includes “your tongue, your lips, your throat, your palate” but not gums and teeth.

Bickerton said it’s well documented that it costs government more to treat the illnesses caused by dental problems than it does to include dental care in health coverage.

“The illnesses it contributes to as far as chronic disease, the risk of sepsis, infection, gum disease — it’s really startling,” she said. “I’m totally baffled as to how we’ve ended up in this situation.”

The Department of Health said in an email that it established the oral health advisory group in 2014 to review existing dental programs and develop a provincial oral health strategy.

For now, it advises seniors without private dental coverage to check with private dental clinics for payment options or consider accessing services through the Dalhousie School of Dentistry, which provides certain dental services at discounted rates.