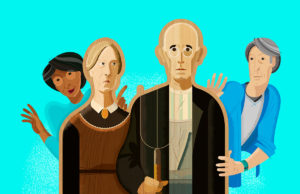 Writer Ceridwen Dovey didn’t think it would be difficult to write a novel from the point of view of a man in his late 80s. Dovey, a 30-something novelist, concocted a generic old man who was crabby and computer illiterate. Another main character was an eccentric old woman who wore magenta-colored turbans and handed out safe-sex pamphlets.

But as Dovey wrote last year in The New Yorker, her effort revealed the problem with assumptions. After reading her first draft, an editor inquired, “But what else are they, other than old?”

What a great question.

When age is the defining feature, our personality, beliefs and individuality are replaced with stereotypes of incompetence, debilitation and dependency. Which leads to one of the most damaging of the discriminating behaviors of ageism — we start treating older adults like children.

No Longer a Man

I remember the embarrassment on my friend Joe Svozil’s face when they gave him a bib to wear for dinner one night at his Denver nursing home. He usually ate alone in his room, but I’d stopped by for a late afternoon visit and he’d asked me to join him.

Not a week goes by that someone doesn’t call me honey or sweetie. My name is Ms. Bennett.

He was 91 at the time but, of course, he was more than just that. Besides being funny and incredibly kind, he was one of the wisest men I’d ever known. He also was a piano man in the Big Band era and had played with Glenn Miller.

But that day, he was humiliated at being treated like a child in front of his friend.

It’s a fairly common practice for health care professionals and even families to interact with elders as if they’ve somehow moved to the other end of the age spectrum. Most will tell you they believe it conveys a sense of caring or nurturing when they lapse into using child-like vocabulary or refer to those adults as “honey” or “sweetie.”

And when asked, almost everyone agrees this behavior isn’t intended to hurt anyone. But that doesn’t take away the sting when it happens. Or the insult when a doctor talks to someone else about a patient, without permission or necessity, while that person is present in the room. Not unlike the way he or she would to a parent of a small child.

While in the hospital last year, 79-year-old Mary Halpin of Denver was enjoying a visit with a good friend. Both were left speechless when her assigned doctor came into the room and proceeded to talk to her friend, not her, about the care plan.

“I’m an adult, intelligent woman,” Halpin recalled thinking, surprised that a doctor would treat her this way. “I didn’t know what to do and neither did my friend.”

Stereotypes Can Turn Into Ageism

We learn negative stereotypes at an early age, according to Becca Levy. As a Yale professor of epidemiology and psychology, her research focuses on ageism. But since the stereotypes only apply to others when we’re young, Levy says, we don’t fight back or build up defenses.

Reinforced as we grow older, they can then become self-stereotypes with dangerous consequences. Her studies have shown these negative beliefs can diminish our will to live and take years off our lives.

Stereotyping also stops us from knowing the person behind the assumption. Which explains why some people shout at the elderly even if there’s no hearing problem or when adult children take over the decision-making of a still-capable parent. And if you wonder what Millennials think it means to be old, AARP has an enlightening video on what happened when they met the real thing.

Going Beyond the Stereotypes

It is clear we need to speak up. After her experience with the misinformed doctor, Halpin told the nurse supervisor about what had happened and let her know she’d never go to that hospital again. “Please talk to me before you assume I have dementia and can’t take care of myself,” she adds.

“Not a week goes by that someone doesn’t call me ‘honey’ or ‘sweetie,’” says Ronni Bennett, author of the popular blog Time Goes By. Her response is to pleasantly but firmly reply, “My name is Ms. Bennett. You may call me that.”

After a few seconds of silence, she says, they usually apologize. “I like to think they realize how demeaning it is and change their behavior with other elders,” notes Bennett.

Wait to see if an older adult truly needs your help, others suggest. Surviving polio and cancer, Judy Jellison Graves, 73, of Orland Hills, Ill., says she uses a cane but is very self-sufficient. “It’s annoying when people feel like I need help with something I have no problem doing myself,” says Graves.

Halpin agrees. “People pat me on the shoulder and point to my walker and ask if they can help me. But why? I’m getting around fine, they just assume I must need help,” she says.

At 72, MaryAnn Melcarek Dykema says we can prevent people from feeling like they have to coddle us. “I don’t want to project that weak, little old lady attitude,” the Brentwood, Tenn., resident says. “I might be all wrong, but this is how I plan on going until I make my final exit.”

Her friend, Teresa Hughes, 73, of Tinley Park, Ill., agrees wholeheartedly. She has felt taken advantage of by those she thinks view her as an old, senile woman living alone. For Hughes, support from family and neighbors has made all the difference.

As a nation, we need to decrease the negative bias and ageism that exists in our society, according to Levy. “But as this starts when we’re young, a good strategy to reduce the negative stereotypes would be to introduce and reinforce positive images of aging starting in early child education,” Levy says.

There’s no doubting the damage that has already been done. Levy references one study where 66 percent of 4- to 7-year-olds said they wouldn’t want to be old. In another, the majority of reactions from preschoolers to sixth graders asked how they’d feel about becoming elderly were rated as negative. They included, “I would feel awful.”

Levy was one of 50 people recognized by Next Avenue this week as 2016 Influencers in Aging. When asked what one thing they would want to change about aging in America, many, including Influencer of the Year Ashton Applewhite, cited the ageism endemic to our society.

So we know we have our work cut out for us. There was a time when we didn’t understand the damage of negative aging views. Now we do. We know there’s much more to us than just being old. We need everyone to recognize that.