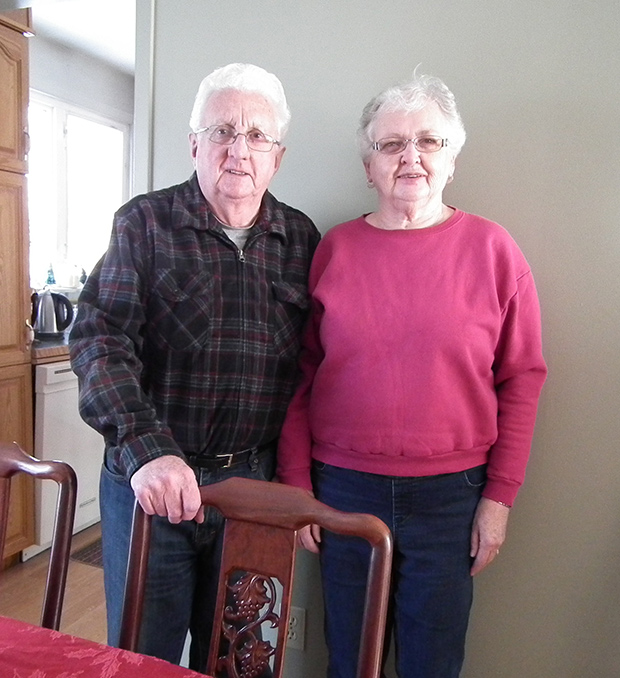 Retired for 20 years, Port Hawkesbury’s Hughie and Connie MacEachen have always been active with family, careers, hobbies and volunteering in the community. Going on 55 years of marriage, they have raised four children and now have 16 grandchildren.

The two met as teenagers. Connie is from Port Hood and Hughie is from Broad Cove, just past Inverness. While Connie was working at a little restaurant in Port Hood, the Village Tea Room, Hughie worked with a crew that surveyed Crown land.

“He’d have the driver stop at the restaurant that I worked in to get an Orange Crush,” Connie said. “He’d say, ‘Are you going to the dance tonight?’”

At that time, Connie said square dances were held a few nights a week in rural Inverness County. On Wednesday night, there’d be one in Glendale. On Friday, it was Creignish and, on Saturday, it was at Neeley’s Dance Hall in Harbourview. That’s the one they usually attended.

“A carload of them would come down from Broad Cove,” Connie said, noting “those were the days.”

“And that’s where all the young people went,” Hughie said. “Everybody knew how to square dance.”

Hughie went away to work.

“After four years, I decided there must be an easier way to make a living, so I went to Moncton, New Brunswick, and took a barbering course.”

In 1962, when the course was finished and, without a job, the couple married.

Connie was a teacher of the younger grades and worked in Inverness County for most of her career. She stayed home for a few years, when her children were small, and substitute taught.

Hughie started working for Archie MacMaster’s Barbershop and then opened his own business in 1966.

From then on, MacEachen’s Barbershop grew, including employing a hairstylist in 1970.

“Men started wearing their hair longer,” Hughie said. “Isabel Kennedy was the first female to work in a men’s barbershop in the area.”

In the 1980s, he bought a beauty salon and moved into that location. He employed five hairdressers and ran the barbershop in a part of the business, later adding a tanning booth and waxing services.

“A lot of people don’t know I have a last name,” Hughie said. “They thought I was christened that name.”

Hughie retired 20 years ago, after selling the shops.

The Mabou and Port Hood shops are still in operation.

Since retirement, the MacEachens keep busy.

Hughie is past president of the Evergreen Seniors’ Club and Past Grand Knight of the Knights of Columbus, of which he’s been a member since 1962. He’s been a member of the Cape Breton Housing Authority for 28 years; he has served as chairman and is currently serving as vice chairman.

Connie has been quilting with the Evergreen Seniors’ Club, since 1994, when the group started. The group helps other quilters finish off their quilts. They also make quilts to use as fundraisers and are currently working on ones for refugees. Connie said new quilters are always welcome.

In 1972, the MacEachens built a family cottage in Collingdale, which is between Port Hood and Mabou. This is where they spend their summers gardening, playing cards with friends and welcoming their children and grandchildren.

“We have a lot of memories there,” Hughie said.

Although they use a computer, the MacEachens say they only use a telephone when talking long distance to their grandchildren, who live in the United States.

When it comes to technology and telephones, Hughie said, “They figure we just use a crank phone.”

What is their secret to a long and happy marriage?

“Some days it’s lucky to be a little bit deaf,” Hughie joked, adding on a more serious note, “Commitment…it’s not always smooth sailing, but you need commitment in a marriage. You have to work at it.”

The MacEachens enjoy going to restaurants together and go out for coffee most mornings during the week to meet up with friends.

And they still go to the occasional square dance.