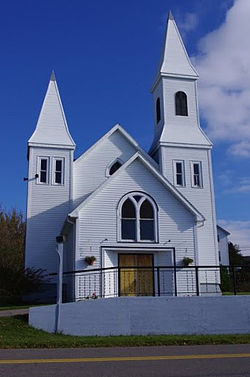 Although they were celebrating a milestone in the history of their church, there was something special about the occasion that was close to the hearts of the whole congregation.
On Saturday, at Cameron Hall in Whycocomagh, a party was held to mark the 90th anniversary of St. Andrew’s Presbyterian Church. The hall was full, the birthday cake tasty, the beverages refreshing, the memories fulfilling but the best part was that there were four parishioners who were celebrating their 90th birthday in 2017, which made them an indispensable part of the occasion.

And guess what? Norman Beeson was the first baby baptised in the new church and Murray Chisholm was the second.

In 1926, to help finance the building of St. Andrew’s, which was officially opened in 1927, they accepted donations from the people of the area and each person’s name was sewn into a memorial quilt. Hundreds of names were sewn into the fabric with most being identified from a particular community.
Of course, over the years it left the collective memory until it was discovered one day in a drawer in the church.

What an artifact to have as part of the church’s history.

The present pastor, Rev. Andrew MacDonald, pointed to his great-great-grandmother’s name as well as two other names recognizable by their fame, Lucy Maude Montgomery, and Charles Lindbergh.
Montgomery wrote the Anne of Green Gables books and Lindbergh was the first to fly across the Atlantic in the year 1927.
The emcee for the occasion was Rev. Andrew MacDonald. “St. Andrew’s Presbyterian Church is celebrating 90 years of devotion to God and Christ, 90 years of service to the community, and 90 years of fellowship. We have reached a very special milestone in 2017, as well as a few other significant historical events worthy of noting. On July 1st, Canada celebrated 150 years since the founding of confederation. April marked the 100th anniversary of the Battle of Vim Ridge, a defining moment in the formation of Canadian Nationalism. And being as we are members of the Reformed Tradition, next month we will mark the 500th anniversary of the Protestant Reformation, all beginning with a little monk name Martin Luther nailing his 95 thesis on the Wittenberg Church Doors. 2017 also marks a great event in the congregational life of St. Andrew’s, we are celebrating four individuals who have reached the young at heart age of 90, Norman, Murray, Dolena, and Christina,” he said.

He recounted brief personal stories about their lives. They were well researched and moving, which only added to the specialness of the day.

“Being as we are here also to celebrate the 90th anniversary of the forming of the Congregation of St. Andrew’s, I would be remiss not to mention that it is also the 90th anniversary of the ordination of the Reverend Doctor Archibald D. MacKinnon, more familiarly known as Reverend AD. AD was the minister at St. Andrew’s from 1927 until 1967, an unparalleled 40 year ministry.
I have with me today a copy of AD’s session notes from the first few years of the new congregation. I just want to highlight a few interesting events. On June 5th, 1927, the first service was held in the church. A month later on July 5th, AD MacKinnon was ordained and inducted, followed by the ordaining of six new elders on July 17th. Finally on July 31st, 1927, St. Andrew’s Presbyterian Church was dedicated. The Sacrament of Communion was celebrated for the first time on September 18th conducted by Rev. AD assisted by the Rev. Dr. DM Gillies. The first anniversary service was held on July 22nd, 1928, and the guest preacher was Professor F. Scott MacKenzie of the Presbyterian College in Montreal. And then in 1930, 18 individuals were received through profession of faith. A very good start to a new congregation,” Rev. MacDonald added.

There were photos and a slide show bringing the past 90 years to life and Kanena MacFadyen thanked the many who made this special day such a success.

Councillor John MacLennan brought congratulations on behalf of the council and people of Inverness County and he wished them 90 more for the young to enjoy.

There were gifts for the 90-year-olds and Rev. MacDonald summed things up by saying, “We’re still going strong 90 years later.”