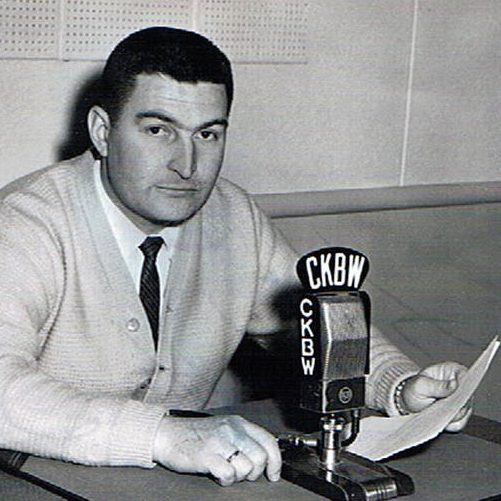 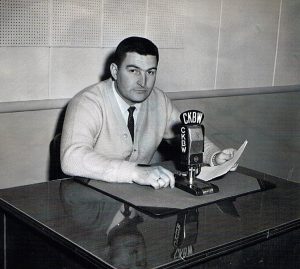 Starting at just 17 as an announcer,Bob MacLaren, of Crousetown, moved from covering news to commercial production to open-line shows and eventually to higher roles such as general manager and program director of CKBW. He retired in 1995.

MacLaren passed away in his home on July 6, surrounded by family. He was 82 years old.

By former employees, MacLaren is remembered as being a fair but sometimes serious figure, as well as someone who helped launch their careers.

“We had quite a lot of scope with creativity and things and sometimes we had to be reigned in and scolded a little bit, which happened,” said Al Mosher, a former CKBW employee, regarding the music he played on his shows when he started.

Mosher was hired by MacLaren in 1966. He started off as the night time rock show host and later moved on to a broadcaster position and became best known for a morning show he used to host.

Jim Corbett was hired in 1978, also as a night time rock host, and filled in where needed as well. He worked around 20 years with the station.

Greg Lowe, who still works at the station, was hired by MacLaren in 1980 as the summer cruiser employee while he was still attending Park View Education Centre. He’s done many jobs at CKBW, from sports to news and is now in sales.

All three men reminisced about the tasks they did while MacLaren was boss, in particular reporting curling scores. MacLaren was a big fan of curling and golf and wanted to make sure all the sports scores were available daily, especially curling.

“As long as he was there, curling was priority for Bob … he loved sports but curling was his passion,” said Corbett.

The serious business of broadcasting

The men say they would often get a little more free with their content when MacLaren was away but he had the uncanny ability to tune in at just the right time to catch them in the act of misbehaving or making a mistake.

“He would pull you into his office and it was kind of scary for younger announcers,” laughed Lowe.

“He had a big voice,” added Mosher.

“Every time Bob left for vacation I broke format … we had a strict format so if it was hard rock, you only played that in the evening, except when Bob was on vacation,” laughed Corbett. “When he got home, all the b’ys at the curling club would tell him.”

Corbett was a bit of a prankster and tells stories of times he tried to trick MacLaren or make him laugh, but that was a difficult feat when it came to a consummate professional like MacLaren.

“He always thought of broadcasting as serious business and it is but some of us young folks didn’t quite see it that way,” said Mosher.

For many years, MacLaren did the 5 p.m. news cast, it was something the men say he took a lot of pride in as well as something locals always looked forward to.

One Christmas Eve, Corbett thought he would finally have the chance to break MacLaren’s seriousness.

“I slipped a story in there, it was a legitimate story about a man in Vancouver who was accosting women, taking off their shoe and sucking their big toe at bus stops,” said Corbett.

Corbett put the story in at the end of the news cast because MacLaren hadn’t gotten a chance to proofread the briefs, but still MacLaren didn’t crack.

“Are you kidding me?” laughed Corbett.

Taking pride in the job

MacLaren took on many roles at the station, from announcer to general manager and every job in between, but he was well known and loved for co-hosting the phone-in show Telefun, which ran for over 13 years and saw two cook books created as a result. The show included a portion where listeners could share recipes on the air as well as a buy and sell part.

He racked up a total of 42 years in radio and was inducted into the Canadian Broadcasters Hall of Fame in 1996.

Despite the many years under his belt, MacLaren would still stop in to the station often, particularly at Christmas with boxes of chocolates for staff. He also attended informal get-togethers that former employees hold annually for the “CKBW old timers.”

A couple weeks before MacLaren passed away, Corbett and Lowe went to his home to do a promo for CKBW’s 70th anniversary.

“He did it in one take, just a consummate professional,” said Corbett.

“He just wanted to say happy anniversary to CKBW going on the air and we ended up staying an hour and 20 minutes and Greg ended up doing an interview with him,” he added.

“That was really cool to interview a legend like that,” said Lowe. “We had some good laughs and it was just a real nice time, I felt blessed to have had the time.”

Lowe says MacLaren reminisced about the people he worked with and mentored at the station including some well known names like actor Donald Sutherland and CBC personality Carol McNeil.

And Mosher, Corbett, and Lowe agree, it was that mentoring and the opportunities that MacLaren gave them that has made all the difference in their lives as well as many others.

“I think we can all say by the fact that he hired all three of us, he altered the entire course of our lives, for the rest of our lives and I think we’re all grateful for that,” said Mosher.

MacLaren is survived by his wife Carole as well as his children and grandchildren. Funeral services were held for MacLaren on July 16 and a celebration of life was held at the Osprey Ridge Golf Club.