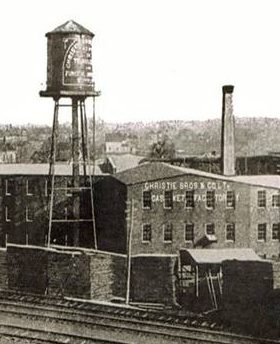 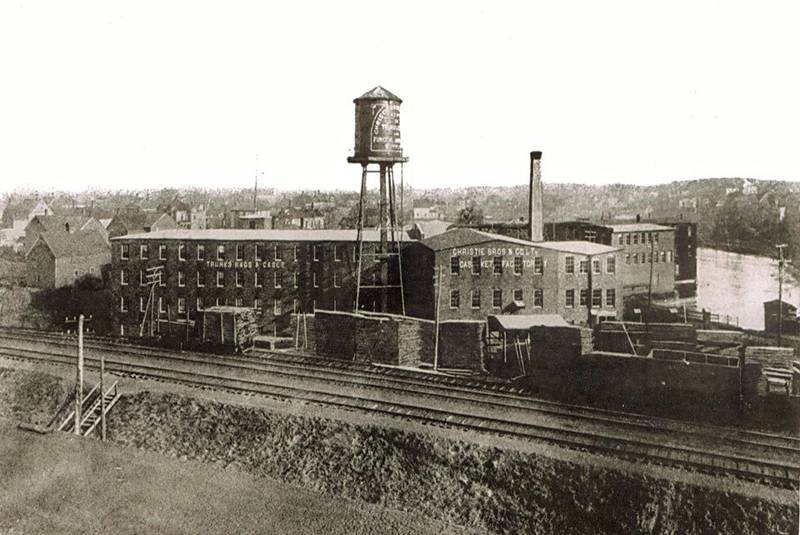 AMHERST – David Christie has many fond memories of working as a teen for his father at the former Christie Bros. & Company Ltd.

“Back in those days there were two major industries in Amherst that had whistles. The Robb Engineering whistle would sound at five to eight and Christie’s had the same whistle that also rang,” the 71-year-old retired lawyer said. “I remember the old factory and when the steel engine was turned on first thing in the morning the whole building would shake as it came alive for the day. There was a real eerie feeling to it, the sound of everything starting to move.”

The Christie factory on Albion Street was closed in the mid-1960s before moving to a new location on the upper part of Church Street, where it ceased operations in 1969. There aren’t many people left who remember the Christie company as one of the main economic engines in Busy Amherst in the late 1800s and early to mid-1900s.

“My father, as an entrepreneur, thought the children should be working so I would go down after school and I was given odd jobs such as stamping out leather. I got 25 cents an hour and I thought that was a lot of money,” Christie said. “I got to know the employees quite well, especially the foremen. They were very valued people.”

Knowing that history could be forgotten if not recorded, Christie set out a couple of years ago to document the company’s history into a small book that he has shared with family members.

Christie is a fourth-generation descendant of the company’s founders. His father, Charles Christie, was the last president of Christie Trunk & Bag Co. Ltd.

Along with his own memories doing odd jobs around the factory as a teen, he has the oral history passed down by his father; his grandmother, Molly Christie; his aunt, Janet Christie; uncle, Hugh Christie; and cousin, Harold Christie.

The corporate minute books of the corporation were passed down to him and he inherited Janet Christie’s scrapbook of newspaper clippings relating to the company and the community during its operation. He also acquired old photographs of various Christie factories and of community events of the time.

“I tried to capture the history of the company but also included some of the other industries around town that operated at the same time,” Christie said. “It was sort of a microcosm of what was happening across North America. You started with companies that were relatively small and were unique in that the owners were the managers. The workers were almost treated like family.”

The company was formed in 1863 by Christie’s great-grandfather, Charles, and his older brother, George, who moved from River Hebert and purchased the mill and carriage shop formerly known as Nelson Mills on Albion Street – where it intersected with Dickey Brook at the approximate location of the present day Amherst Fire Department.

The carriage shop was located on the corner of Victoria and Station Street where the Elm Tree Tavern is today.

In 1872, they imported from the United States a large planer and matcher that was said to be the first in use in Cumberland County. The business employed six and operated from two buildings on Albion Street.

By 1882, the woodworking branch had grown so fast that the manufacture of carriages was discontinued.

Christie’s great uncle, J. Alexander Christie, joined the company in 1880 and the company began to manufacture coffins and caskets while in 1893 it began to make trunks, traveling bags and suitcases and led to the construction of additional buildings.

By 1900, products were being shipped throughout the Maritimes, Newfoundland, eastern Canada and the West Indies by rail and by sea from Halifax.

The company’s officers met the afternoon of the fire and decided immediately to rebuild and within four months a new brick building was built at a cost of approximately $30,000. The L-shaped building housed both the casket and trunk divisions of the company.

Because electricity was not yet commonly used yet in the town, the factory was powered by a large steam engine powered by a large flywheel that powered various drive shafts that ran the entire length of the four floors of the building.

Each of the floors in the factory were connected by elevators that was also powered by steam and the entire facility was equipped with a sprinkler system and the building was heated with exhaust steam generated from the steam engine.

Christie said no history of the factory would be complete without mentioning the former Christie Pond, an artificial pond on Dickey Brook that was first used to power the Nelson sawmill and then the manufacturing equipment at Christie Bros.

The pond and the dam located on Dickey Brook where it passed under Albion Street remained until the late 1940s and besides supplying water power to the factory it was a recreational and entertainment centre for the community with a floating bandstand, rowboats and canoes and was home to two white swans – George and Mary ­– named for King George and Queen Mary.

The pond was given to the town to be kept as a beauty spot and a place for recreation, but in the late 1940s the town considered the pond to be a “mosquito infested swamp” and took steps to have it filled in.

The eastern end of the pond is now home to the Amherst Little League’s two fields while the western end was backfilled and is now occupied by the fire department.

By 1908 two of the original three owners – Charles and George Christie – had died and in 1910 the company first began to use leather in the manufacture of suitcases. The company was also in a strong financial position.

The First World War saw members of the Christie family serve gallantly overseas with Lt. Norman C. Christie of the 85th Battalion of Nova Scotia Highlanders losing his life at Passchendaele in October, 1917.

The factory was also part of the Amherst General Strike of 1919.

There were no labour union in Amherst prior to 1919. Frank Burke, a union organizer from Ontario, arrived in Amherst to organize the workers at eight of the largest manufactures into one union – the Amherst Federation of Labour.

In May 1919, the employees at all eight industries went on strike demanding union recognition, wage parity with workers in central Canada and a shorter work day without a reduction in pay.

The standoff lasted more than a month with assistance from the town council and federal and provincial governments the federation of labour successful negotiated a shorter working day and better working conditions.

A succession of deaths in the Christie family changed the company’s leadership in the 1920s and 1930s. After Norman Christie was killed at Passchendaele in 1917, Warren Christie and the last surviving founding brother, J. Alex Christie, both died in 1923.

When Warren Christie died, his widow, Mary B. Christie, or Molly as she was known, inherited a one-third share of the company and after figuring out how to pay the succession taxes became a director with the company and remained a director until her death in 1967.

The company had good and bad years in the 1920s and 1930s and employment remained stable. It had a stable reserve fund that helped it maintain a level of stability and while there were some tough times during the Depression, the company rebounded and had some of its most prosperous years between 1945 and 1955 with sales and profits increasing every year.

Christie said company minutes in the early 1950s indicated the factory, built in 1903, was no longer satisfactory and the decision was made to move to a new facility on Church Street.

By the mid-1950, revenues were starting to decline because of factors mostly out of the company’s control, such as the cost of raw materials, transportation and increased competition from the firms in Ontario and the United States.

The hoped for efficiencies of moving to the new factory in 1964 never materialized and it became apparent that more capital expenditures would be required to improve productivity and acquire new equipment.

Sales were diminishing and inventories increasing to the point management consultants were hired to study the company’s options for the future. By 1968, most other Canadian luggage manufacturers had either gone bankrupt or voluntarily wound up their businesses.

With the management report saying Christie Trunk & Bag was no longer viable the shareholders made the decision in July 1968 to wind up operations with all the equipment sold to Continental Luggage – which continued the luggage business for approximately two years before winding up operations itself.