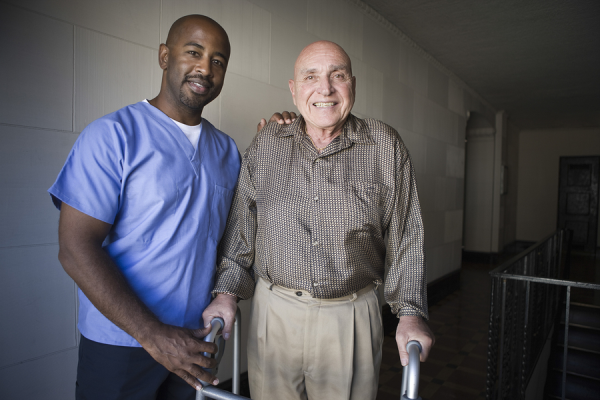 In the classroom at Ottawa’s Algonquin College, at a bed by a window, Morgan O’Dell, 19, reaches out a tattooed arm to delicately wash the nether region of a floppy-haired mannequin. O’Dell’s classmate, Hamza El Hilali, 24, steps in to keep a white blanket in place, to guard their “patient’s” privacy. Her name, they have been told on a slip of paper, is Miss Howard, she has weakness on her left side, and their assignment is to take turns practising giving her a partial bath, working as if their plastic patient were a real person.

O’Dell and El Hilali stand out in the room, two of a handful of male students in Algonquin’s one-year personal-support worker program, which is dominated, as is the profession, by women.

Indeed, El Hilali says his friends were baffled when he chose the program. But he was drawn to the field after seeing his mother care for his grandparents. He is the eldest, and his sisters are much younger, and the care of his own parents should “fall to me,” he says. “Gender doesn’t matter.”

O’Dell, with his bushy hair and tattooed arm, describes the same motivation: He is close to his grandparents, who may need his care some day. Also, he notes, there are jobs in health care. “There are better opportunities here.”

He’s right: As boomers age, and health-care workers retire, jobs in the field will open up. Debates about how to find the workers needed to staff the long-term care residences or to help seniors live longer in their homes – both a preferred and cheaper option – are increasing across the Western world, in countries such as Britain, the United States and Canada.

Yet there remains an untapped pool of workers, some 50 per cent of the population: men, who comprise still only a tiny fraction of the paid caregivers in Canada’s economy.

There’s been a big push by schools and governments to get women into the traditional male-dominated fields of engineering, science and technology, and for good reason: These are growing fields, women are a pool of untapped talent, and they should have equal access to these professions. But there’s been far less focus on moving men into caregiving jobs, which are still overwhelmingly held by women. In Canada, men represent around 6 per cent of registered nurses, and only about 3 per cent of health-care aides, also known as personal-support workers. These are the staff who cover daily needs such as bathing, dressing and, in the home setting, even cooking.

The failure to draw more men into these jobs is a missed opportunity. As boomers age, a more gender-balanced work force will better serve the increasingly diverse demographic of seniors requiring care. For young men with less education, unemployment rates have risen and wages have fallen – they need to look beyond disappearing manufacturing jobs for work. Meanwhile, gender divisions around caregiving persist, leading to care being undervalued. (Studies have found that, even in female-dominated professions, such as nursing, men still out-earn women.) There’s a reason why many personal-support workers don’t make much more (and some even less) than a cleaner. Meanwhile, providing care to a population living longer with more illness has become more medically complicated.

The presence of a few good men won’t fix this. But young men such as O’Dell and El Hilali are debunking a stereotype. “We shove care into a corner,” says Emanuela Heyninck, Ontario’s pay-equity commissioner, “because it’s seen as a female job, and it’s just not a skill that society is used to paying for.”

That has a trickle-down effect: If a job is considered women’s work, then men can feel and look out of place, then patients, raised in that same society, are more likely to prefer women to provide intimate care, to assume a feminine touch is required. Low pay, low status, lousy hours only make the prospects less appealing – to men and to women.

Workers, for instance, are often asked to work casual hours, or split shifts, making their already low income more precarious. This leaves some personal-support workers piecing together a collection of part-time jobs that may not come with benefits. Recognizing this issue, some provinces have recently raised the minimum wages of support workers – in Ontario, it is now $16.50.

“It’s a great first step,” says Deborah Simon, the chief executive officer of the Ontario Community Support Association. In addition to better pay, she says, people need to recognize the contribution that personal-support workers make to daily living. “Some people assume they are there for cleaning services,” says Simon. “They are trained way beyond that.” (Solving split shifts is more complicated, since the bulk of the work peaks at specific times of the day, particularly when patients wake up and when they go to sleep.)

Peter Kellett, assistant dean of the nursing program at the University of Lethbridge, studies gender and paid caregiving. On his office wall hangs an 1990s recruitment poster featuring a group of men standing in masculine poses – a martial arts black belt, a biker, a rugby player – who also happen to be (surprise!) nurses. The slogan, still used today, reads: “Are you man enough to be a nurse?”

Kellett believes this message is counterproductive, unintentionally reinforcing sexist tropes about caregivers. (What’s the reverse? “Are you woman enough to be an engineer”?) When he started nursing 20 years ago, he says, men were there to serve as muscle or security guards more than to provide comfort. Even today, he says, men in nursing are less likely than their female peers to hug patients, lest their actions be misinterpreted. “Society is moving much more slowly on gender than we like to think.” In reality, Kellett says, men take on the job for the same reason women do: “They want to care for people.”

This was the appeal for Marc Sebreno, 35, who graduated in July from Algonquin’s personal-support worker program. He was laid off from his previous job, driving a bus for Greyhound, and, with the advent of self-driving cars, he doesn’t figure those kinds of jobs are coming back. Looking for a new career, he thought about his mother, who has multiple sclerosis, and the importance of good care in her life. “It aligns with my values,” he says. He would like to work in the community he says, because “it gives me more time to spend having a conversation or a laugh.” To offer that kindness to an isolated senior, or a cancer patient, he says, “it doesn’t matter if it is a man or a woman.” But at a few interviews he says his gender has been greeted with surprise.

In the classroom, O’Dell and El Hilali are finishing up Miss Howard’s bath. In response to a question about the mannequin’s new diaper, O’Dell quickly says, “Oh, it’s not a diaper. It’s a brief.” That’s a more respectful term, El Hilali explains. Together, they list of what they call DIPPS: dignity, independence, privacy, preference and safety. “Our job,” says El Hilali, “revolves on those principles.” Some day, a real-life Miss Howard will be grateful.