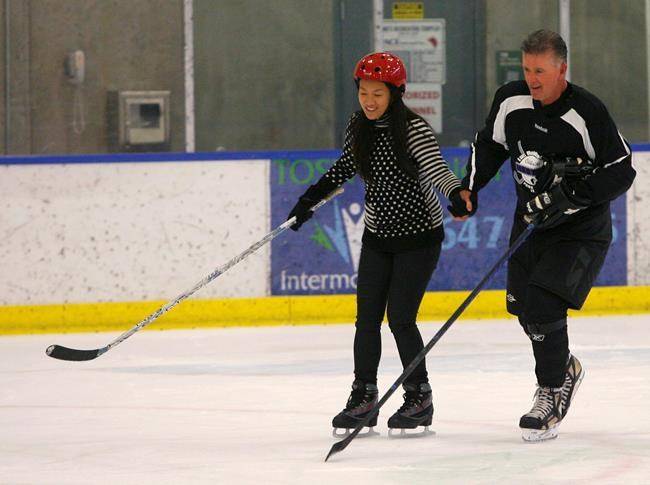 A cardiologist says there’s no right age for someone to hang up their skates in the wake of Alan Thicke’s death from a heart attack after playing hockey with his son.

The Canadian actor died Tuesday in Los Angeles at the age of 69.

Dr. Todd Anderson, director of the Libin Cardiovascular Institute of Alberta and spokesman for the Canadian Heart and Stroke Foundation, said he tells healthy patients to enjoy activities such as hockey.

“I caution them about doing it to extremes, you know go out and enjoy yourself, get some activity, but don’t play like you’re 25,” Anderson said. “For other individuals that have significant heart disease, then I tend to discourage that kind of activity.”

Anderson says the current recommendations are for 150 minutes of aerobic activity a week and he’d like to see people get it.

But he says it’s a case-by-case scenario.

“The fact that he was playing hockey wasn’t necessarily a bad thing. It just happened to be the case where this is where it happened.”

Media reports from the U.S. say Thicke was vomiting and not feeling well, but was able to talk when paramedics arrived.

The Heart and Stroke Foundation’s website says nausea is one of the signs of a heart attack, along with shortness of breath, light-headedness, chest discomfort, sweating and neck, jaw, shoulder, arm and back pain.

Anderson says many people have warning signs before having a heart attack.

“But unfortunately, for at least a quarter of people who have a heart attack, is that their first event is a sudden death.”

During the 2011 election campaign, the federal Conservatives promised to put defibrillators in arenas across the country that could be used on people experiencing sudden cardiac arrest, which can occur after a heart attack.

In February 2013, then-prime minister Stephen Harper stood on the ice at a Saskatoon rink and said the goal was to have 1,500 in rinks that don’t already have them.

Steve Lyon, with the Kitchener-Waterloo Oldtimers Hockey Club, has made a list of the location of each defibrillator in every arena where the club plays. The list is in the binder given to team captains. The club also partners with St. John Ambulance to offer an adult CPR course.

“Everybody looks out for each other. If anybody’s in the dressing room and looks like they shouldn’t be going out onto the ice, they’re told not to by the captains or even some of their fellow players.”

Lyon said players usually recognize when it’s time to hang up the skates. Sometimes the league has to step in, he said.

“There’s been a few times where we’ve met with a player and said ‘We just don’t think, for your own safety, that it’s worthwhile playing any more,’ and it’s a hard thing because a lot of these elderly players have been playing with the same guys for decades,” he said.

“It’s hard for them … because part of our league is also the camaraderie.”