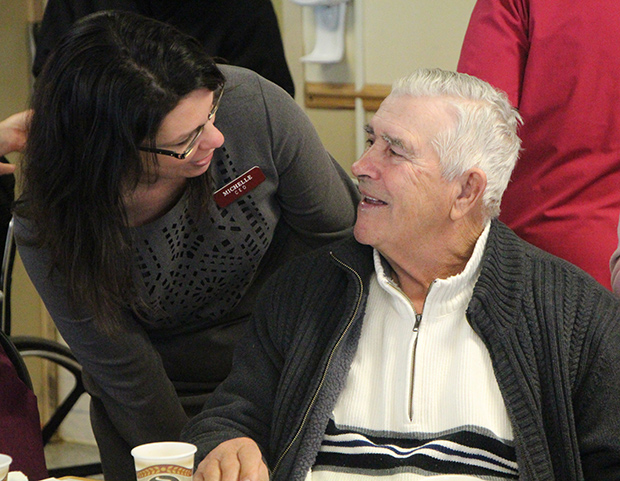 The R.K. MacDonald Nursing Home honoured a member of its extended family with a surprise tea earlier this month.

On Jan. 16, Charlie Worth was the guest of honour as he and some family members joined staff and residents of the home for plenty of reminisces and, of course, a lot of laughs.

“I don’t think he ever missed a day,” Joe Bouchie, R.K. MacDonald director of environmental services, said of Worth’s commitment to the residence.

For almost half a century, the Antigonish area businessman made daily stops, except on Sundays, where he collected its garbage. As for that one day of rest, Worth made up for it with two R.K. visits on Mondays.

“It had to be done,” Worth said, downplaying his level of dedication and quality service, agreeing the R.K. was one of his top priorities over the years.

His long-time tie to the nursing home came during the same year – 1970 – that he established Charles Worth Trucking. His son, Charles Jr., runs the business, which specializes in the removal of garbage, compost, recyclables and junk.

Although his son now runs the operation, the elder Worth – who will turn 78 in less than one month – stressed he is only semi-retired.

Worth continues to make weekly pick-ups, including at Shamrock Acres, a local mobile home park. Like the R.K., he had planned to stop his visits, which take place each Saturday morning, but the residents coaxed him to continue.

He will also spend plenty of time tending to the hobby farm at his Somers Road home, which includes sheep, chickens and laying hens.

The avid card player is also a fixture at the Wednesday games at the John Paul Centre on Main Street.

“A lot of them,” he said, with a chuckle, when asked how many trucks he has gone through over the years.

His wife of almost 53 years, Sheila, who was by his side during the R.K. celebration, noted “he has covered a lot of road.”

When asked about his memories, the soft-spoken Worth said “there are a lot of them.”

“What about the time the woman came out to pay you in her negligée,” Sheila said to laughter around the table.

“If you charge too much, you will lose the business,” Worth noted.

At the R.K., a stream of well-wishers stopped at his table; some with quick memories, including that they were going to miss his common question – ‘where is the key?’ [to the garbage shed] – or his suggestion that the bags coming from the kitchen were ‘too full.’

‘We’re going to miss you’ was also a common refrain.

One of those who shared a moment with Worth was Vicky Pelly, who has worked at the R.K. for more than 35 years.

“Everybody is going to miss him,” she said, noting Worth never mixed up the names of her and her sisters – Kandy and Eva – also long-time RK employees, which can be a common occurrence.

“He is a very special man,” she added.