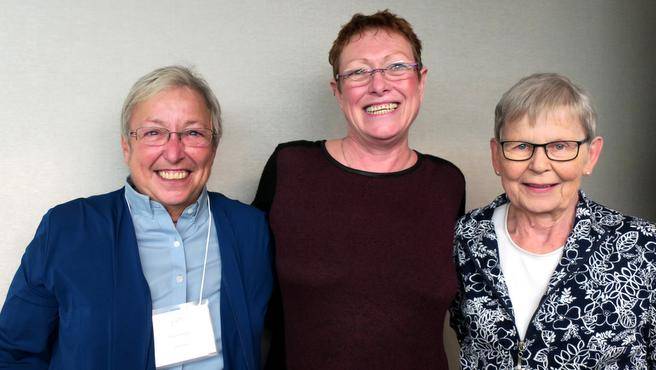 Sandra Britten was in her early 50s when she was diagnosed with dementia. More than two years later, she is still too young to qualify for a seniors’ discount at any retail establishment, but still she is living with a disease that many associate with those much older than her.

Britten is one of three Nova Scotian women that took part in a video series, called 10 Symptoms & Strategies, created by the Alzheimer’s Society of Nova Scotia to help dispel myths about the disease, destigmatize and give first person accounts on what it’s like to live with dementia, and how they use strategies in their everyday lives to handle symptoms.

“When I would tell people about the diagnosis they would just look at me and go, ‘No you can’t have dementia, because you aren’t old,’” says Britten. “People really have that stigma attached to it. When I got over the shock on my own, that’s when I got some education, I think it’s very important.”

Faye Forbes, who was also featured in the video series as someone who lives with dementia, says the message in the video is important for those close to people living with dementia to help them understand what it’s like for people to live with the disease, and wants to remind people that even though their family member, friend or client may have been diagnosed with dementia, they are still the same person they always were.

“Over the years I’ve spoken to many groups, both professional and non-professional,” says Forbes, who was diagnosed seven-years-ago. “When they heard my story they came to some enlightenment on what their loved ones were going through or what their patients were going through. They knew the book stuff, but they didn’t know the personal stuff, it was a real eye opener.”

Britten, Forbes, and another Nova Scotian woman living with dementia, Anne McQuarrie, are all featured in the video series, and highlight 10 symptoms and strategies that have affected their own lives. Explaining in thoughtful detail, the three women discuss symptoms that are often associated with dementia, such as memory loss, misplacing things and disorientation — but they also discuss symptoms that may not be as familiar. Their descriptions of problems with language and abstract thinking give an inside look into some of the hidden symptoms of dementia that can be difficult for people to explain. The video series also covers mood and behaviour symptoms, changes in personality that people who are close to them may notice, as well as the loss of initiative to participate in parts of their lives that they once enjoyed.

The women give their personal accounts of these symptoms, and ways that they effectively deal with them on an everyday basis.

“I found I couldn’t do things that I loved,” says Forbes, describing what it felt like to deal with the initial changes in her life. “I gave them up because they caused so much frustration. I used to love to knit and things like that. I couldn’t follow a pattern, I couldn’t follow a recipe.”

Britten agrees with Forbes, saying found herself pulling away from certain parts of her life. She says the first year after her diagnosis she became a ‘hermit,’ not interested in engaging with people or activities she once loved. She says these symptoms can be hidden, and she hopes the video series will bring attention to the more unknown attributes of dementia, so that others might see them and seek help.

“By hearing our stories I hope to give some insight into what it’s like. I don’t want it to be the hidden disease,” says Britten.

The video series was unveiled at the Alzheimer’s Society of Nova Scotia conference in Dartmouth on Oct. 23, and went live on their social media channels and websites that same day. Sarah Lyon, director of philanthropy for the society, addressed the crowd at the conference and explained the video series is available for anyone to watch and can be viewed as one whole short film, or in separate segments, no longer than three-and-a-half minutes each, so each symptom and strategy can be viewed on their own. Lyon says they hope the videos used by both those living with dementia, and those who care for them.

“We want these videos to be more than watched, we want people to reflect on what these ladies are saying,” says Lyon. “We want people to ask themselves, are they being respectful to people with dementia, meeting them where they are in their journey, helping them learn new tools?”

The videos can be seen on the Alzheimer’s Society of Nova Scotia’s website, http://www.alzheimer.ca/en/ns, or viewed on their YouTube channel at AlzheimerNS.