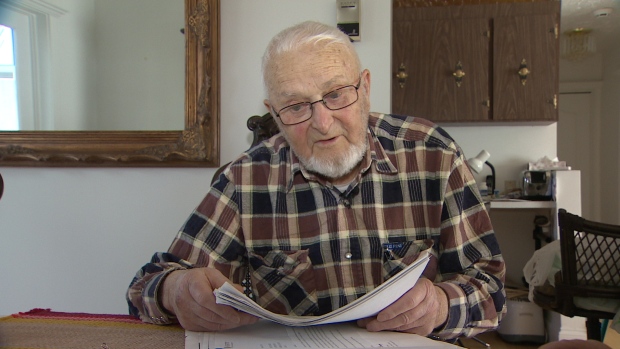 A Halifax senior is warning against a high-risk investment strategy he says cost him tens of thousands of dollars, a scheme one Nova Scotia lawyer calls an “epidemic” pushed by financial advisors in the mid-2000s.

More than a decade after he took out a loan to pay for his investments, Humphrey Longard says he still owes far more than what the investments are actually worth.

In 2004, he was 71 and his wife was 67 when they went to a mutual fund salesperson for financial advice. Both were on fixed incomes.

The couple had no children and wanted to ensure they could leave a nest egg for charities upon their death. The advisor recommended they use a high-risk leveraged strategy that involved borrowing money to invest.

“I don’t remember the exact words but she said, ‘It’s a sure-fire thing. You can’t lose,'” he said. “You borrow $500,000 or $400,000 or whatever it was and you’ll invest it into another income and it’ll pay its way, plus it will make your money and in the end you’ll have more money than you started with.

“It sounded good to me so that is what we did.”

To qualify for the loan, the Longards needed a significant net worth. The mutual fund salesperson submitted paperwork showing the couple was worth more than $8 million, $6.9 million of that in land and properties.

“The whole works of it wasn’t worth a million. If I could have sold everything I had at that time for a million bucks I’d have been happy,” Longard said.

Longard acknowledges he signed all the paperwork submitted by the mutual fund salesperson, but said he trusted her and she was working for a well-known company.

It wasn’t until the Nova Scotia Securities Commission suspended her registration on a separate matter, forcing the Longards to seek another financial advisor, that the couple discovered the risky situation she’d put them in.

None of this is news to Truro lawyer Dennis James, who has been involved in successful lawsuits against financial advisors who recommended high-risk leveraged investments.

He said there was an “epidemic” of financial advisors pushing leveraging in the mid-2000s. He’s seen people who used their homes to borrow money and subsequently lose them.

He calls such investments “a select financial tool for those who have both sophisticated investment knowledge and deep pockets to withstand the risk of the marketplace.”

The non-profit Canadian Foundation for Advancement of Investor Rights (FAIR) has been speaking out against leveraged investments.

Executive director Neil Gross told CBC News the strategy should “virtually never” be recommended to seniors on a fixed income, or to most other people.

“The principle of leveraging is sold to people on the basis that it can magnify the gains for them,” Gross said. “Often the reverse side is that it also magnifies the loss or the loss potential is downplayed so people who may not be sophisticated hear this sales pitch and get a skewed impression of its potential advantages.

‘That can be a very dangerous thing for people who don’t understand all the implications.”

FAIR is lobbying for better regulation of investment professionals so they can only recommend leveraging to sophisticated investors with a high-risk tolerance and the ability to absorb losses.

It also wants a requirement that investors have independent advice from an legal professional before they use their home as security for an investment loan.

Longard subsequently lodged several complaints, including with the Mutual Fund Dealers Association of Canada, the investment company, and the bank where he borrowed the money he subsequently invested.

All dismissed his complaint. The MFDA told him there was “insufficient evidence of a violation.”

The investment firm that employed the mutual fund salesperson said it dismissed his complaint, in part, because both Longard and wife had signed the documents saying they understood the risks involved. Longard, whose wife passed away in the midst of all this, said those risks were never explained.

Longard said he wonders what oversight there was at the investment company, and whether a manager or superior ever validated the value of their assets or the suitability of placing two seniors on fixed incomes in a high-risk situation.

Longard estimates he’s lost about $275,000 between the loan and other investments recommended by the mutual fund salesperson. On top of that, the investments he made with the loan are worth about $80,000 less than the outstanding loan balance.

Longard complained to the Nova Scotia Securities Commission, which regulates the investment industry. It was unable to consider his complaint because of a six-year statute of limitations, the timeframe in place in most provinces.

“I think there’s a very large gap in the process,” said James, the Truro lawyer, adding the Mutual Fund Dealers Association process needs to be more open and user-friendly.

He said both police and the securities commission are challenged by budget and enforcement resources. He’s calling for the province to appoint an ombudsman who is “independent of the industry with real teeth and resources; somewhere consumers can turn and get a reasonable response in a timely way.”

In the meantime, he said there have been improvements since the mid-2000s, in part because of strong court rulings.

“Even though it’s not perfect, internal compliance regimes are a lot stricter internally for any of the large credible companies,” he said.